eXp World Holdings is far from slowing down.

Despite an enormously challenging year globally for many businesses, eXp World Holdings not only weathered the storm but exceeded expectations by recording record results in earnings and growth for Q4 and the full-year 2020. (Read press release here.)

Some highlights worth mentioning include:

Record Q4 transaction volume:  Residential volume in the fourth quarter of 2020 increased 123% to $24.6 billion, compared to $11.0 billion in the same year-ago quarter.

“eXp experienced tremendous growth in 2020 as our agents and staff demonstrated resilience and overcame the challenges presented throughout the year,” said Glenn Sanford, Founder, Chairman and CEO of eXp World Holdings. “Our cloud-based brokerage and virtual working environment enabled continuous operations and supported the rapid growth of adding more than 15,000 agents during the year. Our value proposition resonated with agents around the world, as we seamlessly opened in five new countries and gained domestic market share in our residential and commercial businesses.”

eXp continued to innovate and expand its businesses in 2020 as well, acquiring search technology company Showcase IDX and purchasing personal and professional development site SUCCESS Enterprises. The company also expanded brokerage operations into five new countries, including South Africa, India, Mexico, Portugal and France. Already in 2021, two new locations were added — Puerto Rico and Brazil, with plans to launch in Italy and Hong Kong by the end of the first quarter 2021.

Additionally, eXp Commercial was launched in 29 U.S. states, with plans to open in all 50 states by the end of 2021.

> See eXp’s timeline since launching in 2009

To recap the year’s results, a virtual fireside chat and investor Q&A session will be held on Thursday, March 11, 2021, at 2 p.m. PT / 5 p.m. ET with eXp World Holdings Founder and CEO Glenn Sanford and CFO Jeff Whiteside to discuss the fourth quarter and full-year 2020 financial results and recent milestone achievements.

It will be live-streamed and is open to investors, current shareholders and anyone interested in learning more about eXp World Holdings and its platform. The conversation will be recorded for future viewing. 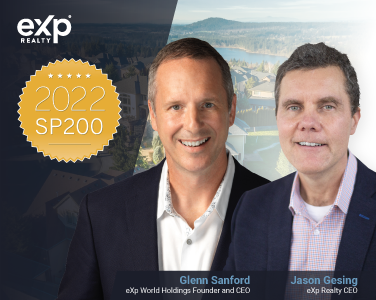