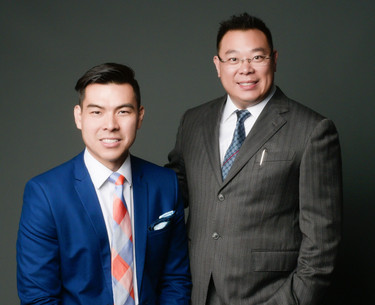 Editor’s note: In celebration of Asian American and Pacific Islander Heritage Month, we are featuring eXp agents of this heritage and sharing their stories of service, values, and commitments.

The power team of Daniel Eng and Calvin Wong knew they were professionally aligned. Since 2012, the pair have combined forces at Engvest, their commercial real estate network brokered by eXp Commercial that delivers a full spectrum of services to tenants and landlords in the Dallas-Fort Worth area, where they closed $45 million in 2021.

But something more elemental was part of their business mindset. It had to do with what each of their father’s had shown them – and why Daniel and Calvin say they called their fathers the people they most admire.

Daniel’s father is from Hong Kong, and moved to the United States in 1956. He was a serial entrepreneur who owned restaurants, developed real estate and always found ways to give back to the community.

“If dynamics changed or there was a business failure, I always saw my dad be able to get up and adapt. That was what he strived for. That was his entire mindset and now that’s what’s in our blood,’’ Daniel said.

Calvin’s father is from Malaysia and remains his biggest influence.

“He taught me that by taking risks, what he was doing was improving our lives. You have to do things out of your comfort zone, which he did as a contractor and developer of residential projects. He showed me the way,’’ Calvin said.

A Cloud-Based Brokerage Is What Engvest Needed

With their global backgrounds, and their gold-standard Certified Commercial Investment Member certifications, Daniel and Calvin were eager to partner with a brokerage that would let them work more fluidly in markets beyond Dallas.

Moving to eXp Commercial in December 2020 was not one of those risks. It was the best way to maximize investment opportunities – a decision sealed when James Huang was named president of the fast-growing division in 2020.

“Knowing James from his past leadership in several organizations, I trust that he will lead eXp Commercial to be one of the largest commercial real estate platforms. The business model of eXp is disrupting the real estate brokerage industry. Being the world’s fastest-growing cloud-based brokerage, it provides an edge to agents to grow without borders,’’ Calvin said.

In the year since switching to eXp, Daniel and Calvin have attracted or partnered with more than 100 agents in the #WePartnersNetwork. That includes agents in San Francisco, Chicago, New York, Las Vegas, Arkansas, Florida, Toronto and Hong Kong. It’s a burgeoning network that Daniel and Calvin are leveraging for national and international deals that maximize opportunities for their investor coalition.

In March, they were both named to the 2022 D Magazine CEO Commercial Power Brokers.

How do they keep finding another gear for their commercial real estate enterprise? Like Daniel and Calvin said: They’re persistent. They like to take risks. It’s in their blood.